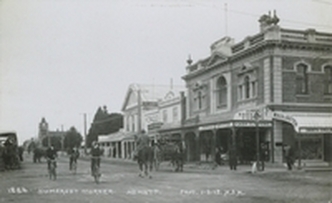 Early History
The Somerset Lodge, No.1811, was the first Masonic Lodge in Mid Canterbury and as its number indicates was the forerunner
of the present Ashburton Lodge. It took its name from the Somerset Hotel in which it first met. The proprietor of which was Wor.Bro Sherman
its first W.M. This Lodge was consecrated on 10thSeptember 1877.

About 1889 the Somerset Lodge had financial difficulties and as St John’s was faced with a decrease in membership, proposals for the
amalgamation of the two Lodges were drawn up and on 18th September 1891 the St John’s Lodge became affiliated members of Somerset
Lodge. The Warrant of the St John’s Lodge was returned to Grand Lodge. Steps were then taken to change the name of the Lodge to
Ashburton.
In a letter dated 20thApril 1892, Grand Lodge advised that this had been done.  The first meeting of the Ashburton Lodge was held on
8th July 1892. The first W.M. of the combined Lodge was W.Bro J.M. Cambridge. 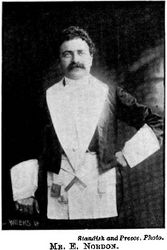 Worshipful Master of Lodge Ashburton, was installed in  office in June, 1902, by Mr. R. D. Thomas, Right Worshipful District Grand Master of Canterbury. He was initiated in Lodge Ponsonby, No. 708 S.C., Auckland, in which he attained the position of Senior Warden, and was on the point of being elected Master, when he removed to Canterbury.  On his arrival in Canterbury Mr. Nordon affiliated with Lodge Ashburton and Lodge Canterbury, No. 1048, E.C. He was born in London, in 1869, and left England as a youth. After three years spent in America, and twelve months in Australia, he came to New Zealand, and arrived in Auckland in 1890. There he resided for eleven years, and was engaged in business as a Press agent, an avocation which he followed in Ashburton and Christchurch. For several years Mr. Nordon was secretary of the Auckland Cycling Club, and later on the Council of the League of New Zealand Wheelmen, on which he represents North Canterbury. He also sat on the Council of the Amateur Swimming Association, on which he represented Westland; he was the Secretary of the New Zealand Hockey Association, and also an active member of the New Zealand Amateur Boxing Association.

Barrister and Solicitor, Tancred Street, Ashburton. Mr Crisp was born in Hobart, Tasmania, in 1852, and educated at the Hobart High School. He served his articles in his father's office, Crisp and McGill, Hobart, and was admitted to and bar in Hobart in 1876. Mr. Crisp then came over to New Zealand. He was twelve months with Messrs Haggitt Bros. and Brent, solicitors, Dunedin. In 1877 he came to Ashburton, and had the distinction of being the first solicitor to practise in the town, in which he established a prosperous business. Mr. Crisp was a Past Master of the St. John's (later Ashburton) Lodge of Freemasons, and acted as Installing Master. He was for two years borough solicitor, and had been chairman of the Ashburton Racing Club.

Baker and Confectioner, Wills Street, Ashburton. Mr Bryant was born and educated in Christchurch, Canterbury. He was employed by Mr. Robertson, baker, of Victoria Street, Mr. Faville, and Mr. T. Plummeridge, all well known Christchurch bakers. In 1885 he went to Ashburton, and after working at his trade there for twelve months, he established himself in business in Havelock Street. He became a Freemason in 1901, when he was initiated in Lodge Ashburton, E.C. 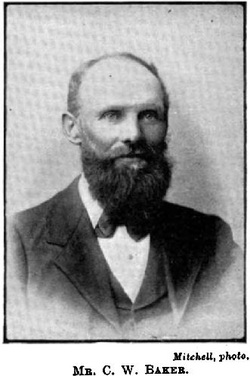 Was a native of Devonshire, England, where he was educated and taught his trade. He arrived at Lyttelton by the ship “Zealandia,” on the 9th of December, 1871. After being engaged by Mr. D. Reese as a builder for eight years in Christchurch, he removed to Ashburton and joined his brothers in the business. Mr. Baker became a member of Lodge Somerset, English Constitution, in 1884, and is one of its Past Masters. 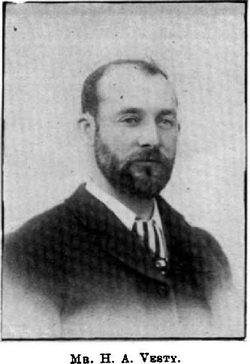 Builder and Contractor, Moore Street, Ashburton. Mr. Vesty was born in Leicester, and brought up in the Midlands of England. He came to New Zealand with his stepfather in the ship “Lurline” in 1883, and settled at Ashburton, where he was engaged in the building trade until he established himself in business in 1890 as a builder and contractor.  He was responsible for erecting a large number of shops, dwellinghouses, and other buildings in and around Ashburton. Mr. Vesty would draw the plans, submits specifications, and carry on the work to completion. He ran a workshop in Moore Street, near West Street, with several men employed, chiefly on joinery work. Mr. Vesty was initiated as a Freemason at Ashburton, in 1888, and is a Past Master of Lodge Ashburton, No. 1811, E.C. 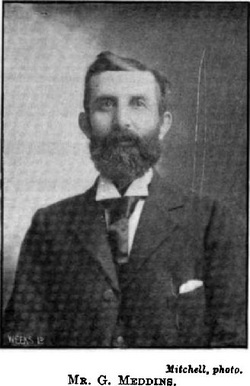 General Ironmonger, Burnett Street, Ashburton. Mr. Meddins was born in Wales. In 1879 he came to New Zealand under engagement to the firm of Messrs Twentyman and Cousins, of Christchurch, with whom he remained for three years, after which he was in the employment of Messrs Friedlander Bros. and Mr. Henry Zander, of Ashburton, for fifteen years. He established himself in a premises as “The People's Ironmonger,” in 1898. The business thrived, and was one of the most flourishing in the town. In a shop facing Burnett Street a good stock of general ironmongery was displayed, and special attention was given to carpenters' tools, builders' and furnishing ironmongery. Mr. Meddins held the district agency for the “Orion” and “Zealandia” cooking ranges, the W. Davey sewing machine, an improvement on the Singer. Guns and ammunition by the best makers were always kept in stock. For thirteen years Mr. Meddins was a member of the Ashburton borough school committee, and is a Past Master of the Ashburton Masonic Lodge, into which he was initiated in 1887. He is an ex-officer of the Grand Lodge of Canterbury, English Constitution.

Bookseller and Stationer, Ashburton. Mr. Jones was born in London in 1852, and arrived in New Zealand in the early part of 1858. He received his education by private tuition, and was trained as a bookseller and stationer, a calling which he later followed. Mr. Jones arrived in Ashburton in 1877, and established a business which rapidly developed, until (c.1903) it ranked amongst the best businesses in Ashburton. He was elected to the Ashburton Borough Council in the early 1890's. After occupying a seat for a term of three years, he retired from the council till 1896, when he again became a member. Mr. Jones was for some years a circuit steward of the Wesleyan church, and was also a local preacher. As a Freemason, he has been Worshipful Master of St. John's Lodge. He was also a member of the Ashburton borough school committee.